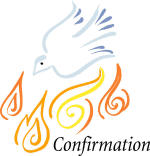 Now when the apostles in Jerusalem heard that Samaria had accepted the word of God, they sent them Peter and John, who went down and prayed for them, that they might receive the holy Spirit, for it had not yet fallen upon any of them; they had only been baptized in the name of the Lord Jesus. Then they laid hands on them and they received the holy Spirit. (Acts 8:14-17)

Since the birth of the Church on Pentecost, when the Holy Spirit descended upon the gathered disciples, the Spirit has guided and strengthened the followers of Christ. Empowered by the Spirit, the Apostles preached the Good News, baptized those who accepted Word of God, and imparted the gift of the Spirit by laying hands on those who had been baptized.

Confirmation is the sacrament by which the person who is confirmed receives the Holy Spirit. Confirmation enriches the baptized with the fullness of the Holy Spirit, strengthening them so that they can be better witnesses to Christ by their words and actions.

Some older Catholics (those with more salt than pepper in their hair) might notice that the Rite of Confirmation has changed since they were confirmed. For example, the bishop no longer gives the person just confirmed a slight slap on the cheek to remind us that we “are soldiers for Christ.” Like all sacraments, the way Confirmation has been celebrated has evolved over the centuries. In this reflection, we will look at a brief history of Confirmation.

From the earliest years of the Church, the Holy Spirit has been imparted on new Christians by the laying on of hands by one of the apostles or their descendants (bishops). For example, in Acts 8, the deacon Philip baptizes many in his mission to Samaria, but Peter and John were then sent to Samaria to lay hands on the newly baptized and give them the Holy Spirit.

In time, the rite of initiation was celebrated by a three-fold immersing or pouring of water after the candidates profession of faith. As the newly baptized emerged from the baptismal font, they were clothed in a white garment, and the bishop would anoint them with oil on their fives senses. This anointing by the bishop would gradually develop into the sacrament of Confirmation. After the anointing, the neophytes would be taken into the celebration of the Eucharist where they would be welcomed at the table as fully initiated Christians.

In the last installment, we saw that in the early Church, a catechumen was initiated into the Church by being baptized, having that baptism sealed by the bishop by anointing with sacred oil, and then being received at the table for the celebration of the Eucharist. As Christianity grew from the cities into the rural areas, the bishop could no longer be present at all baptisms. In the Western Church, the sealing of the baptism (what we now refer to as Confirmation) was reserved to the bishop, so Confirmation was separated in time from Baptism. This was especially true as infant Baptism became the norm as Christianity spread.

Although the Sacrament of Confirmation has changed over the centuries, the anointing of sacred oil (Sacred Chrism) has remained as an essential sign of the Sacrament. Why anoint with oil? From ancient times, oil has been a symbol of strength, healing and agility. For Jews, our ancestors in faith, anointing with oil was the sign of God choosing someone to be a priest, prophet and king. For example, we find in 1 Samuel 16 that when David was brought before Samuel, “The Lord said: There—anoint him, for this is the one!” After Samuel anointed David as the next king, the spirit of the Lord rushed upon him. At Confirmation, we receive also received the Holy Spirit when the bishop anoints us with Sacred Chrism and says, “Be sealed with the Gift of the Holy Spirit.”

At Baptism, we were given a new identity. In addition to the name we were given by our parents, we became a child of God—we became Christians. If we were baptized as an infant, we were given that identity because our parents promised to hand on the faith to us. It took us time to learn what it meant to be Catholic; we were told the stories of our faith, we experienced the Nativity scene, the ashes on our forehead, waving palms, and the Crucifix. We were taught our prayers and learned to dip our hands in holy water, make the sign of the Cross, and be still at Mass. We became more and more aware of our Christian identity.

But just as a youngster has to come to personal terms with his or her birthright identity, a Catholic must ultimately claim as their own their identity as a Christian. The Sacrament of Confirmation is the opportunity to affirm your Christian identity. That is why prior to the bishop anointing those to be confirmed, they renew the promises that their parents made for them at Baptism.

In the Sacrament of Confirmation, the bishop imparts the Holy Spirit by saying, “Be sealed with the gift of the Holy Spirit” as the person is anointed with Sacred Christ. The Holy Spirit is given as a helper and guide throughout life. The Holy Spirit, “God’s first gift to those who believe,” in turn imparts gifts to the person confirmed. As the bishop prays prior to the anointing, the seven-fold gifts of the Spirit become our gifts because we have put on Christ.

The seven gifts of the Holy Spirit are the Divine Power active in the life of Jesus of Nazareth. We only have to look to his parables to discover Jesus’ wisdom and his treatment of the poor, sick and rejected to see his understanding. His right judgment can be seen in his answers to the scribes and Pharisees when they tested him. His courage was shown in his determination to go to Jerusalem even though he recognized what fate awaited him. We see his knowledge of God and his reverence are seen in his preaching and in his prayer life. His wonder and awe are seen in his love for God’s creation.

These same gifts are given to us in the Sacrament of Confirmation. But like all gifts and talents, they must be developed through practice as we carry on Christ’s mission.

Saturday
8:45 am (English)
followed by the Novena to Our Lady of Perpetual Help
5:30 pm Vigil Mass (English)

First Friday of the Month
After 8:45 am Holy Mass, for 1 hour (church)

Monday – Friday
1 hour following 8:45 am Mass in the church

The Holy Rosary is recited Monday – Saturday at 8:15 am in the church, before Holy Mass.

Click here for information about the Legion of Mary Rosary in Spanish, Mondays at 7:00 pm via Zoom.

Healing Mass will not be offered until further notice. If you need a priest for the anointing of the sick, please call (866) 976-7415.

Learn about the Healing Mass…

Our new app is now available to download for iPhone and Android smart phones. Stay connected with our parish throughout the week with instant notifications, an easy to access event calendar, and the ability to quickly reply to or share messages. Also enjoy additional features like prayers, daily readings, helpful reminders and much more.